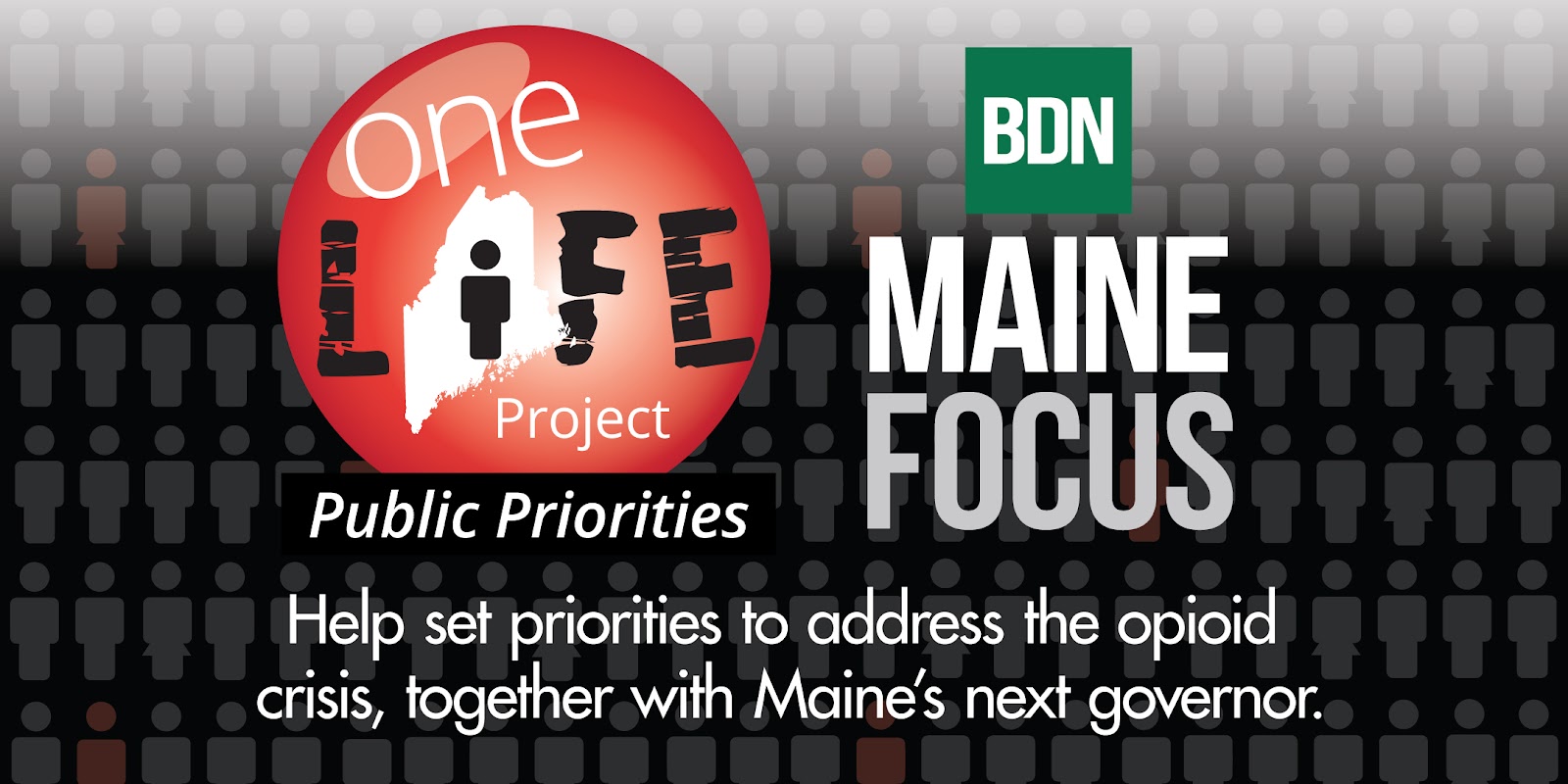 Bangor, MAINE — All four gubernatorial candidates will gather with members of the public at 5:30 p.m., Wednesday, July 18, to discuss what’s most important to do next to address the opioid epidemic.

At the One Life Project: Public Priorities event, independents Alan Caron and Terry Hayes, Democrat Janet Mills, and Republican Shawn Moody will listen to and talk with attendees in small groups as they work together to select what both the Bangor region and Maine as a whole should consider the top priorities for preventing more overdose deaths.

The candidates will then speak before the entire audience about what they have learned and what they would do as governor to address the opioid crisis.

The event at the Bangor Arts Exchange ballroom starts at 5:30 p.m. Doors open at 5 p.m. It is free, but people should register here to ensure a seat:

At the event, attendees will discuss with their table a number of specific policies and initiatives that have been proposed to help save lives. They will then vote for the solutions that they think are most important and urgent.

This is the third One Life Project event, which was inspired by Garrett Brown, a young man from Augusta, who let the Bangor Daily News chronicle his life for two-and-a-half years. He died in November 2015 after overdosing on heroin.

Thank you to our event sponsors: Penobscot Community Health Care, Penquis, and St. Joseph Healthcare, a member of Covenant Health. Thank you also to our table sponsors: The City of Bangor and Vacationland Inns.

Principal for a day

The Principal for a Day program is sponsored by the Portland Regional Chamber of Commerce in collaboration with Portland Public Schools and for the last five years, it has matched public schools with community leaders and businesses. It promises, “… a firsthand understanding of the complexity, unique character and opportunities available in Portland's schools.”

MARCH 5, 2018 | AUGUSTA, ME – Today’s certification of 66,687 signatures by Maine’s Secretary of State guarantees that on June 12, 2018, Maine voters will be the first in the nation to rank their choices in primary elections for U.S. Senator, U.S. Representative, Governor, State Senator and State Representative. This marks the first time in our state’s history that voters have initiated a People’s Veto in response to the Legislature’s attempt to overturn a Citizen’s Initiative.

“The people of Maine want a system that works for us, and for our children and our grandchildren,” said Cara Brown McCormick from Cape Elizabeth, who collected more than 900 signatures for the People’s Veto. “Together, we stood up to the politicians who wanted to take away our right to choose the way we elect our leaders. I’m excited to rank my choices in June and to vote YES for the People’s Veto to keep Ranked Choice Voting moving forward.”

Dick Woodbury, Chair of the Committee, added, “Braving subzero temperatures and Arctic winds, Maine people stood on street corners and outside town dumps, municipal centers, and libraries to insist on more voice for Maine people. I could not be more proud or thankful.”

“This is a really important voting reform. It will enable us to elect the candidates who truly represent a majority of the people,” said Victoria Adams, a volunteer from Kennebunk. “I’m looking forward to ranking my choices starting this June and voting YES for the People’s Veto.”

“There are a lot of people running for Governor this year. That’s one reason why we need Ranked Choice Voting,” said Kathleen Glenn-Lewin, a volunteer from Brunswick. “This June, I will rank my choices based on policies and principles, and not on polling. That’s also why I will be voting YES on the People’s Veto, so we can keep electing our leaders with this better system.”

The Knight Canney Group’s Crystal Canney is one of those candidates.

AUGUSTA, ME – Fighting sub-zero temperatures and an almost impossible 88-day timeline, Maine people are turning in more than 80,000 signatures today to keep Ranked Choice Voting (RCV) alive. In November of 2016, RCV was approved by the second largest referendum vote in Maine’s history. But last October, the Legislature voted to kill the new voting system by delaying and repealing the voter-approved law and overturning the results of a democratically held election. Those actions triggered the launch of a People’s Veto campaign — an incredible grassroots effort to gather at least 61,123 valid signatures in the dead of winter to restore the will of the people.

Kyle Bailey, the Committee’s campaign manager said, “This effort is nothing short of a miracle. It demonstrates just how hungry Maine people are for more voice and more choice in our democracy. These signatures were collected by volunteers who stood outside of post offices and town dumps in feet of snow facing below freezing temperatures. With the submission of these signatures, Maine people are sending a clear message to the politicians in Augusta that it’s the people who are in charge, not the politicians.”

Nicole Grohoski, who collected signatures in Hancock, Waldo and Knox County said, “This has been an extraordinary effort from citizens all over the state — we had nearly two thousand volunteers out there collecting signatures and driving them all over Maine to be counted. People got involved because they are tired of being dismissed by Augusta politicians who think they know better than the Mainers they represent. When the majority of Mainers speak, our politicians should listen.”

Upon submission of these signatures, the People’s Veto takes immediate effect, and RCV implementation must begin. RCV will be used in the June 2018 election for all state and federal primary races. Voters will also have the opportunity to reaffirm their support for RCV on this June’s ballot by voting “Yes” for the People’s Veto to insist on more voice and more choice in our democracy.

Campaign Chair Dick Woodbury said, “This is the first time in history that a People’s Veto has been invoked in order to preserve a citizen-initiated law. I could not be more proud of Maine people for taking this on, and for affirming that We the People own our democracy.”

For More information on the People’s Veto: http://www.rcvmaine.com